Asteroid Ephemeris 2023 Asteroid Ephemeris for 2023 The following ephemerides are for the following selected asteroids: Eros, Psyche, Sappho, Ceres, Pallas, Juno, Vesta, and Chiron. Ceres is a dwarf planet and rules food, agriculture, transitions in a female’s life, nurturing, motherhood, and family relationships. Sagittarius Vesta Sign. Vesta in Sagittarius is devoted to a higher power or universal truth. This serves as inspiration for their greatest work. They may become fanatic about their beliefs. They believe in intellectual freedom. They are practical and determined to learn as much as possible. They are dedicated to their faith. 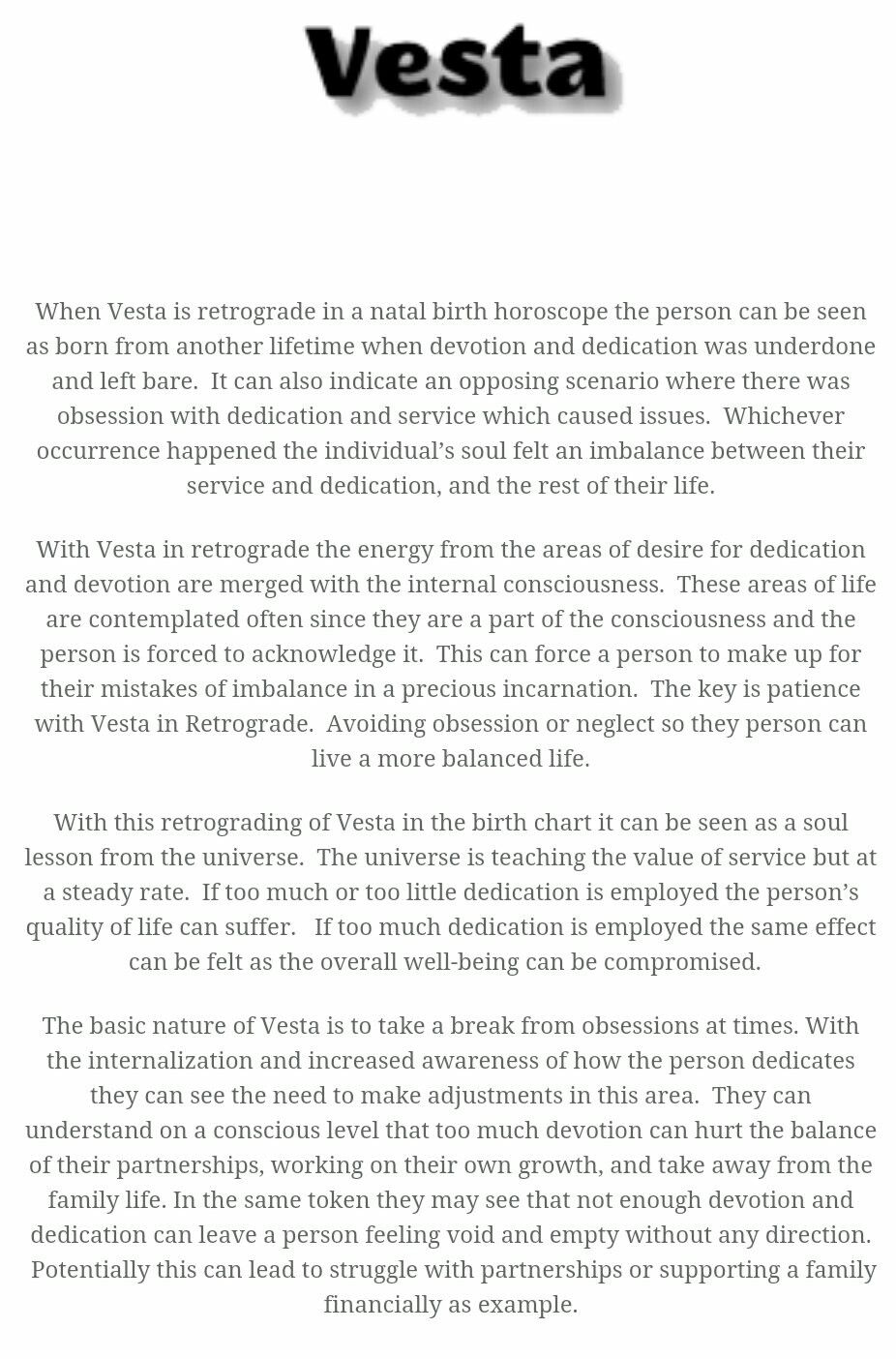 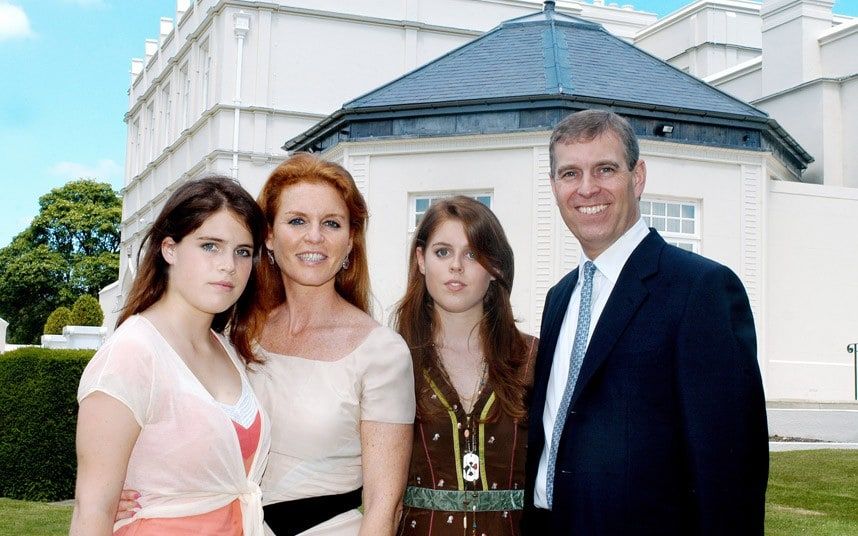 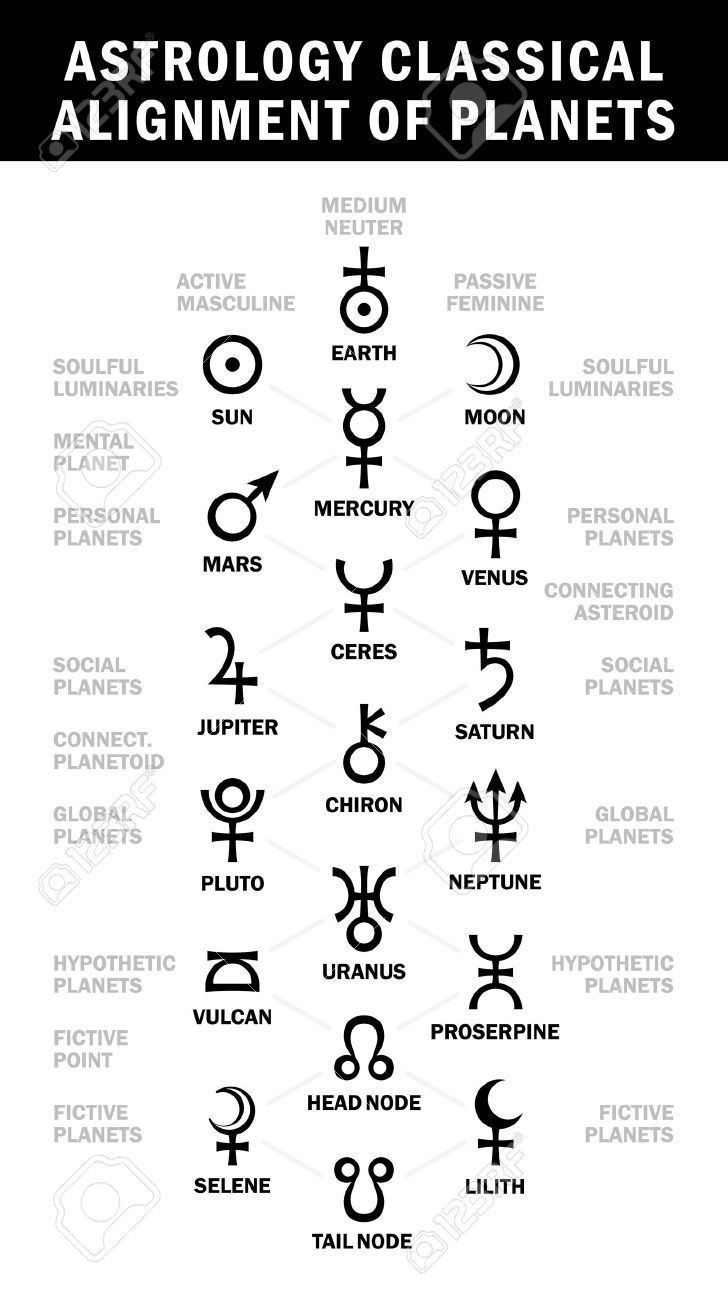 The asteroid, Vesta, was discovered by German astronomer, Heinrich Wilhelm Olbers, on March 29, 1807. She resides in the main asteroid belt, has a diameter of 503 kilometers, and an orbital period around the Sun of 3.63 years. Vesta's basalt-like surface has a very high albedo, or reflectivity, and a spectral curve which resembles that of achondrite meteorites. It's the brightest of the main-belt asteroids and barely visible to the naked eye in clear dark skies.

Vesta, or Hestia to the ancient Greeks, is best known as the goddess of the hearth and keeper of the sacred flame. In Greek mythology, Vesta was the first born of Cronus (Saturn) and Rhea and the last to be reborn when Zeus (Jupiter) freed his siblings from Saturn's stomach. Vesta chose to remain a virgin, refusing to marry either Apollo or Poseidon. Considering some of the men she had to choose from, this was not rocket science. Every home as well as the central public hearth in every city contained a shrine to this goddess, who watched over the family and state. Roman priestesses whose duty was to tend the sacred flame were known as vestal virgins.

Fire was not only essential, but sacred to the ancients. Whenever the Greeks emigrated to foreign lands, they brought a portion of their home fire with them as a link to their homeland. Similarly, women leaving their family at the time of their marriage brought part of the fire from their mothers' hearth to their new home. The flame and shrine to Vesta were integral parts of a happy married home. The Romans built a temple dedicated to Vesta which had her eternal fire at its center, believed to ensure the safety of the Roman Empire. Six of the most beautiful and noble maidens were chosen as divine servants, i.e. the vestal virgins, to tend the sacred flame. This service began at age six. They took vows of chastity and celibacy which were in force for the duration of their 30 year service. Upon its completion, they were allowed to leave and marry, though apparently not many did. If a priestess allowed the fire to go out, she was severely whipped. Anyone who broke the primary vow of chastity was not only whipped but entombed alive in a subterranean crypt. Due to the strictness of their vows and limited lifestyle, they earned tremendous respect and enjoyed many privileges in Rome. Unlike other women, they were free from paternal control and could own their own property. In return for their righteous service, they were given great reverence, respect, and honor.

In spite of the strict enforcement by the Romans of the vow of chastity, Vesta's origins in pre-Hellenic Greece were of a much different nature. Their primary deity was the Great Mother Goddess who was personified by the Moon and represented by the sacred flame, which symbolized the kundalini fire and secret powers of sexual transmutation. While the women who tended these fires were known as virgins, this was not because they were sexually chaste, but because they were unmarried, thus belonging to no man. They participated in various rites of a sexual nature and gave themselves to strangers as an act of divine service. In other words, their raison d'être was not only to keep the home fires burning, but largely associated with ritualistic sex. Of course the symbolism between fire and passion is far from subtle as well. Needless to say, in today's world these women would not be associated with virgins in any way.

Astrologically, Vesta contains elements of both Virgo and Scorpio. Virgo is represented by Vesta, the virgin, and Scorpio is associated with sex and passion. In the ancient Assyrian and Babylonian cultures, these two constellations of the Zodiac were connected and represented by a serpent. As the cultural norm became patriarchal, Libra was placed between them in the portion known as 'the Chelae,' or claws of the scorpion. If you think about that, there's some serious irony there, that this region became Libra, representing relationships and marriage. Somehow I feel as if Peg and Al Bundy could relate. 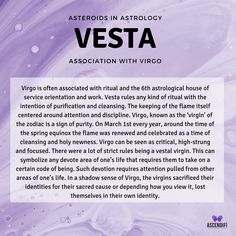 As a combination of Virgo and Scorpio, Vesta is a prognosticator of devotion on one hand and fanaticism on the other. She is also an indicator of attitudes associated with sex, particularly those at a visceral and subconscious level that are not confined within the bounds of a traditional or monogamous relationship. This is the realm of sexual fantasies and desires that are far outside the bounds of polite society. Subconsciously, these desires are not seen as promiscuous, per se, but rather as a ritualistic act of service. Social norms, however, can instill a strong sense of guilt in spite of the inner drive a Vesta-type individual possesses to engage in numerous sexual exploits. In negative aspects, Vesta can influence the opposite behavior as well, such as sexual repression, fears, or the inability to share oneself with others or maintain close relationships. Similar challenges at expressing these energies could result if she's retrograde.

The ability to concentrate on a specific task or goal is also influenced by Vesta's placement. In fact, the Latin word for hearth is focus. This ties in closely with the Virgo work ethic and meticulous approach to problems of any sort. In today's world Virgo would probably use preventive maintenance software to handle day to day maintenance in a factory or warehouse. Maintenance software makes automating daily work simple.

Vesta can convert sexual energy to a solid commitment and dedication to one's work and often operates in this fashion in those who dedicate themselves to spiritual or service-oriented quests, such as certain religious orders. Similar energy conversions are also in effect in the pursuit of enlightenment. In a less dramatic fashion, Vesta also influences the path one should take to fulfill their dharma, or life's mission, without which they can become frustrated and unfulfilled.

In synastry, or astrological compatibility, aspects between Vesta's placement in the natal charts of the individuals involved with either the placement of their partner's Vesta or other planets indicates the nature of their sexual relationship, attraction, and what their expectations or deepest desires regarding an intimate relationship may entail. For example, contact with planets like Venus or Mars will intensify sexual attraction while contact with planets such as Saturn can cause excessive reserve or even coldness.

In other words, Vesta's meaning in astrology is every bit as complex as her roles were in different cultures, all of which reflect the power the life giving forces of sexual transmutation have in each of our lives.

Virgo and aquarius compatible astrologycompatible astrology. The key here, however, is that Virgo is a mutable earth sign, whereas Aquarius is fixed air. When combined with their elemental assignments, it’s clear how and why Virgo is more strait-laced, and Aquarius is more free flowing. As an earth sign, Virgo defers to their stable nature and expresses themselves in a much more logical, methodical way. Aquarius tends to passionate and temperamental while Virgo operates more methodically, and with little fuss. Virgo is very organized and levelheaded. Aquarius is modern and finds routine unthinkable. Virgo will find Aquarius exciting but may become annoyed trying to probe this artist’s mind. Aquarius woman - information and insights on the Aquarius woman. Aquarius horoscope - daily, weekly and monthly Aquarius horoscopes. Aquarius compatibility - the compatibility of aquarius with the other astrological signs in love, sex, relationships and life. Aquarius history - the history of Aquarius. The relationship or friendship between the Virgo and Aquarius is rarely dull and boring. It is filled with excitement. The Aquarius can get the Virgo out of their comfort zone, and push them to try new things, more so than any other zodiac sign.Virgo will feel a sense of adventure when they are around Aquarius.

NASA Science News for March 29, 2011: As NASA's Dawn spacecraft closes in on Vesta, researchers are wondering if the behemoth space rock is just an asteroid--or something more? FULL STORY at http://science.nasa.gov/science-news/science-at-nasa/2011/29mar_vesta/

Find out how Vesta manifests in your life..