Eclipses happen four to six times a year, activating the unexpected and forcing us to take swift action. Ready or not, it’s time for change—and a clear decision.

Dragging your feet? Avoiding the inevitable? Resistance and procrastination are natural; we tend to avoid what’s painful and stay in our comfort zones. Solar and lunar eclipses are dramatic turning points. They provide the cosmic kick in the pants to push us off the fence and into action.

On the upside, if you’ve been waiting around for a clear sign or answer, an eclipse will speed up the process.

Eclipses are these agents of change. They occur four to six times a year and turn things upside-down. In our disoriented state, we may act out of character or see turbulence in the world. Eclipses can also help break patterns and shift dynamics. However, most astrologers suggest waiting a week or so before taking drastic action, allowing the eclipse energy to settle first. 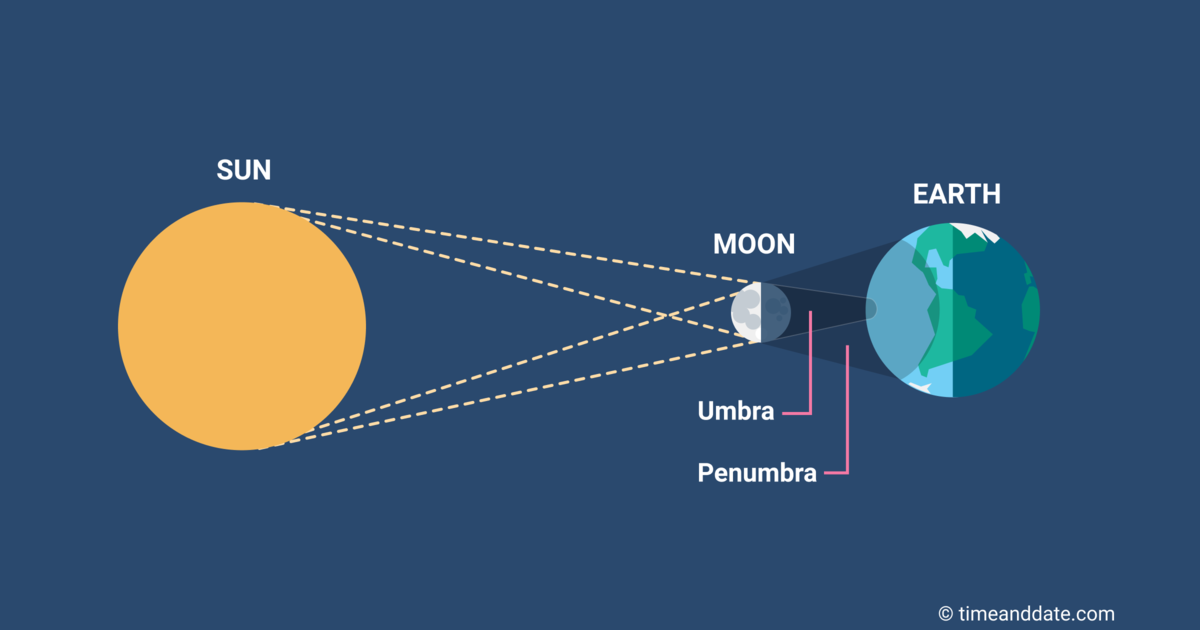 Solar eclipses occur at new moons. During a solar eclipse, the moon is directly between the Earth and Sun (known as a conjunction, or meetup, of the Sun and the moon). During this brief time, the moon can block out the Sun’s light, temporarily disconnecting us from our sense of reality.

In astrology, a solar eclipse could bring a bold beginning, setting us on a new path that we hadn’t imagined for ourselves. While it may be surprising—or not something you even expected—a solar eclipse has a bigger vision in store for us. We have a finite focus as human beings, and it’s natural to concentrate on what’s in front of us. At times, this can limit our perspectives, and cause us to miss out on opportunities. Solar eclipses might snatch away the familiar temporarily, forcing us to consider options we would never otherwise explore. Although this can cause upheaval, eclipses are “cruel to be kind.” Major growth can happen during these cosmic power outages. This is when we should leap into new (and generally improved) terrain, even if we feel forced there by circumstances beyond our control.

Lunar eclipses occur at full moons. A lunar eclipse occurs when the moon is nearing its full state and enters the Earth’s shadow. During a Lunar eclipse, the Earth is exactly between the Sun and the moon (known as an opposition between the Sun and the moon). For a brief spell, we can see the Earth’s shadow turning the luminous full moon intense shades of reds, browns and grays. Depending on where in the world you are, an eclipse may be visible.

What To Do During Solar Eclipse Astrology Eclipse

According to astrology, lunar eclipses give us a glimpse into what Carl Jung referred to as the “shadow self.” We all want to think of ourselves as good, kind people, but hey—we’re also human! What we discover about ourselves and others during lunar eclipses can be tough to admit, even shocking. Still, this gives us the opportunity to embrace our wholeness, and see where we have room to grow in new directions.

Owning the fact that we have emotions (like fear, anger, jealousy and rage) is the first step to getting a handle on them. Trying to pretend we’re perfect or stuffing down our feelings? That’s when our unexamined issues creep up and overwhelm us. If we’re willing to suspend judgment and accept the good along with the bad, lunar eclipses can be potent moments of self-discovery.

Why our ancestors feared eclipses

Eclipses throughout history have gotten a bad rap. They were both revered and feared. The ancients were baffled by the Sun’s “disappearance” from the sky during a solar eclipse, so they made up stories involving angry (or “hangry”) gods eating the Sun! Because eclipses have correlated with climate catastrophes, such as hurricanes, tsunamis and earthquakes, many cultures believed that eclipses angered the gods. During lunar eclipses, people were known to act “loony” (root word: lunatic, which is of the root word lunar)—and in our own informal observation, we’ve noticed that, too. However, Western science has only confirmed a single fact: We need to protect our eyes if we watch a solar eclipse!

Rituals for the eclipses: Renew and release

Rituals for new and full moons are becoming more popular by the day. At an eclipse, a ritual can help you stay grounded in the face of any chaos, especially if you set dedicated intentions.

Solar eclipses fall at new moons, so a ritual or intention-setting could focus on helping you start anew. Themes could include: finding the courage to make a fresh start, embracing change, taking a risk (even if you’re scared), putting yourself out there, making a big reveal/coming out of the metaphorical closet.

Lunar eclipses fall at full moons, which are times of ending, closure, manifestation and transition. Lunar eclipse rituals may center around having a huge breakthrough, pushing past barriers and limits, letting go of a painful situation for good, breaking free of an addictive pattern, healing or releasing.

You may want to do a zodiac-specific ritual depending on which sign the eclipse falls in astrologically. Follow our tips for new and full moon rituals and gatherings. You can do a ritual by yourself or gather with friends to amplify your intentions.

Eclipses and the Lunar Nodes of Astrology

Lunar nodes—the “destiny points” in astrology—are tied to the eclipses. The lunar nodes are determined by the points where the moon’s orbit crosses the “ecliptic”—the apparent path the Sun makes around the earth that is the basis of Western astrology. The north and south nodes in your chart are determined by where the eclipses were happening. So from a mystical perspective, eclipses are tied to our past lives, karmic paths and soul missions!

If you believe in destiny and astrology, and you're about to give birth, you might be wondering what it means if your baby is born during a solar eclipse. While there are plenty of debunked myths about solar eclipses being harmful to pregnant women, you'll be excited to learn that plenty of astrologists agree that babies born during solar eclipses are sprinkled with a little extra pixie dust, and are destined for greatness.

'The sign of the solar eclipse shows a 'universal' destiny,' Karen McCoy, karmic astrologer and author of Spiritual Astrology said on Inner Self. 'It is the energy of the collective unconscious that needs to be actively expressed on the Earth at that given point in time for its own balance. The souls that are born into each solar eclipse have been 'dusted' with that energy and have promised to spread that energy on the Earth to help with the growth and evolution of the planet.'

McCoy explained that people born during solar eclipses are basically tapped to clarify the solar eclipse's energy for others. Because everyone still has free will, McCoy noted that the only decision is whether the person bestowed with this gift from the universe will use it for positive or negative gain.

Harnessing The Gifts Of The Solar Eclipse

Because each solar eclipse falls in a different sign, they all mean different things. Astrology King noted that the Aug. 21, 2017 solar eclipse at 28°52′ Leo falls very near to the brightest star of Leo Constellation, the fixed-star Regulus. What is the best horoscope sign. Regulus' characteristics of independence, pride, confidence, bravery, and violence can lead to ambition and excitement on a path to positive change, or to downfall and destruction on a path of nefarious negativity. 'While open minded and generous, Regulus wants conquer and rule, to leave [their] mark before a successful challenger claims the throne,' Astrology King wrote.

Obviously a person born during a solar eclipse is not going to go from womb to spiritual warrior as soon as they take their first breath. The energies of each eclipse can take a long time to fully manifest, and if you're born during a solar eclipse, McCoy describes it as the purpose for your entire existence on Earth. Therefore, depending on how you use this gift, it can be a blessing or a curse for you, and everyone you come into contact with. 'You can go about your life willingly sharing this gift with your fellow beings, or you can teach the lesson by having such negative traits that those around you learn what not to do from your behavior and personality,' McCoy explained. 'Evolved souls cooperate with this universal plan, spreading their solar eclipse teachings and mastering their lunar eclipse lessons, thus fulfilling their contracts with the universe.'

What To Do During Solar Eclipse Astrology 2021

President Donald Trump is an example of a person using eclipse gifts negatively. Trump was born during a lunar eclipse, which offers similar gifts. Instead of using his power to foster positive change, Trump wields his power as a weapon of destruction. As a parent, you can have an impact on the path your child chooses, which is a big karmic responsibility.

What To Do During Solar Eclipse Astrology July 2018

According to Astrology Enthusiast, Prince William was born during a solar eclipse in 1982. In stark contrast to Trump, the Prince of Wales is a perfect example of someone using their eclipse gifts for the greater good. Prince William has helped advance the mental health conversation by publicly speaking out about how his mother's death affected him psychologically, and starting the Okay To Say campaign a result.

He even teamed up with Lady Gaga (watch the video of their conversation above) to talk about PTSD and depression after Mother Monster penned an open letter, which she posted on her Born This Way blog, about battling PTSD, depression, and anxiety, and how she has benefited from both psychotherapy and psychiatric medication, and from openly talking about her struggles. The pair mused about how important it is to publicly address mental health issues, which goes a long way toward dispelling the stigma that surrounds depression and anxiety. Because, being alone in the darkness is the worst part.

If you study the effect eclipses have on people born during them, it's no surprise Prince William is becoming a positive leader for mental health awareness because people born during an eclipse are natural born leaders. The June 21, 1982 solar eclipse in Cancer that occurred when Prince William was born emphasized 'a powerful drive to care for, cherish and protect others, and a strong need to give and receive emotional safety, privacy, and security that is focused on personal relationships,' Rick Levine noted on Daily Planet Pulse. The meaning behind his eclipse gifts, and the actions he's taken to manifest them are in perfect balance.