There are hundreds of yogas (planetary combination) in Vedic astrology. Some are very powerful to make us highly affluent and glorious. Some are highly dangerous that can make our life a hell.

This total count of Sun’s longitude + Moon’s longitude + 93.20 degree is known as Yogi Point. What is yoga in Vedic astrology? In Hindu astrology, yoga is the relationship between one planet, sign, or house to another by placement, aspect, or conjunction. Besides, there are numbers important Yogas in astrology that most of the people don’t know. Even sometimes the astrologer does neglect due to sheer ignorance or those yogas are not that popular among the astrologers and people as well.

My opinion is to pay equal attention to these yogas in your horoscope be it good or bad. I am going to explain these important yogas in a nutshell here.

The Pandits who are not having knowledge of PanchMahapurush Yoga in Vedic astrology should not be considered as astrologer. It has great significance in the predictive science of astrology.

The person born with Ruchak Yoga is valorous and popular. The native gets wealth, prosperity, name and fame due to his own quality of character.

The Bhadra Yoga happens due to Mercury. If the planet Mercury is in Kendra and posited either in the own sign or exaltation, then Bhadra Yoga takes place.

The native belongs to Bhadra Yoga will have gift of eloquence and becomes an oratorical speaker. This makes the person highly intelligent and having photographic memory. The native gets position and authority over others.

Hansh Yoga takes place in the chart due to the position of the Jupiter. When the planet Jupiter is posited in the Sagittarius, Pisces and Cancer and if these houses become Kendra, then the Hansh yoga happens.

The native born with Hansh yoga belongs to the intellectual class of people. It makes the person spiritual. The native is praised among the galaxy of intellectuals.

Sasa yoga occurs in the birth chart due to planet Saturn. If the planet Saturn is own signed or exalted and if it is posited in the Kendra then Sasha yoga happens.

The person born with Sasha yoga will be successful in politics. He will be a judge and an authoritative person. The native becomes rich, prosperous and long-lived.

Gajakeshari Yoga is an extremely powerful yoga in the birth chart. If this happens in your birth chart it will make you highly successful in life.

When the planet Moon remains in Kendra from Jupiter and vice versa, this powerful Gajakeshari yoga happens. Almost all the classical texts on the Hindu astrology have praised the efficacy of the Gaja Kesari Yoga.

Etymologically, Gaja means elephant, Keshari means Lion. Hence, it is a very powerful yoga in astrology. The person born with GajaKeshari yoga will enjoy glory in life. It makes the person very popular as a speaker, leader and rich. The native becomes intelligent, wise and extremely glorious in life.

The Neech Bhang Raj yoga happens when the debilitation of the planet gets cancelled and gives good result.

Sometimes we feel that the planet Saturn is weak in Aries. Hence, it will bring very bad result. However, it is not always a fact.

There are certain conditions in the birth chart that helps the debilitated planet to be stronger. Some conditions are explained here.

If the weak or debilitated planet is placed with an exalted planet then Neecha Bhang Raj yoga happens.

Example: the planet Mercury is placed in Pisces with Venus.

If a planet is weak in the Lagna chart and exalted in the Navamsa chart, then Neecha Bhang Raj yoga takes place.

Vipareet Raj yoga is one of the most important yogas in the astrology that makes the person rich, prosperous, knowledgeable and blissful.

Such a person with Laxmi yoga becomes happy, sagacious, and affluent and gets all round achievement in life.

If the planet Jupiter is posited in the 2nd house in own sign, gets aspects of Mercury or Venus and gets conjunction of Venus and Mercury, Kalanidhi yoga happens. What astrological sign is most compatible with virgo.

The native born with Kalanidhi Yoga get success and glory in the country. Such a native becomes efficient in the field art, entertainment and culture.

Mahabhagya yoga is one of the most popular yogas in the Hindu predictive astrology. Etymologically, Maha means great, Bhagya means fortunes. Hence, Mahabhagya yoga illustrates its meaning as great fortune.

Generally, the Mahabhagya yoga happens with the great people such as celebrities from sports and entertainment industry.

Also the influential people from both politics and bureaucracy do have MahaBhagya yoga.

How it happens: If a male native born during the day time and the planet Lagna(Ascendant), Sun and Moon occupies in odd signs such as Aries, Gemini, Leo, Libra, Sagittarius and Aquarius, Mahabhagya yoga takes place.

If a female born during night and the Lagna (ascendant), Sun and Moon occupies in the even sign such as Taurus, Cancer, Virgo, Scorpio, Capricorn and Pisces.

The Lagna is an extremely important house in the birth chart. Hence, it needs to be very powerful. If any auspicious planet remains both the sides of the Lagna or ascendant, the SubhaKartari Yoga happens.

The person with SubhaKartari yoga will be healthy, robust, intelligent, commanding, rich and prosperous. 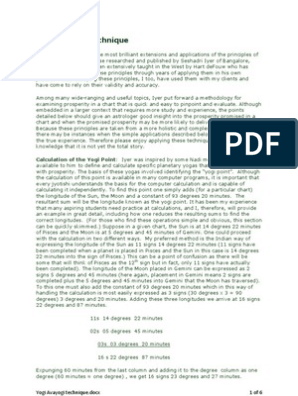 The person with Akhanda Samrajya yoga becomes king or ruler and has great influence over the people and society. In the modern day the powerful political leaders do have this notable yoga.

A notable Yoga named Amla Yoga is not less powerful than any other yogas. Amla yoga happens, when any auspicious planet such as Jupiter, Mercury and Venus gets posited in the 10th house either from the Lagna and Moon.

Such a person is lucky to get money, wealth and fame during the life time.

Dhanyog – Some example of Dhan yoga

The money, wealth, assets, properties and all kinds of material achievements are the part of life. You can be extraordinarily rich and affluent if the planets are strongly placed in the birth charts.

Some of the planetary combinations have been described here. In a nutshell these are the Dhana yoga in astrology.

Kotipati yoga happens when the Lagna belongs to a movable sign (CharaRashi), Venus and Jupiter placed in the Kendra and Saturn also in Kendra.

When, the lord of the 5th and 9th are in Kendra and get aspect of auspicious Jupiter, Moon and Mercury, Mahalaxmi yoga happens.

The Mahalaxmi yoga makes the person rich and prosperous that is beyond imagination.

Generally, the 12th house is considered to be bad. However, when the planet Venus remains in the 12th house, it makes Shukra yoga.

This Shukra makes the person super-rich.

If the planet Moon and Mars placed in the 9th house or 11th house or if it is posited in the own sign or exalted sign, this Chandra+Mangal Yoga happens.

The person born with this combination becomes extremely rich.

If the 2nd lord Jupiter conjoins with Mars, then Guru+Mangal yoga happens.

In such a condition, the native becomes highly rich and prosperous.

Kahal Yoga happens when the lord of 4th and 9th house placed in mutual Kendra and the lord of the ascendant becomes powerful.

If the lord of 2nd, 9th and ascendant remains in Kendra and the 2nd lord as well as 9th lord get aspect of the Lagna lord, the native becomes highly rich and prosperous.

If the auspicious 11th lord placed in the 10th house and 10th lord remains in the 9th house, then the person gets plethora of money and wealth.

If the 6th house, 7th house and 8th house is occupied by auspicious planets.

Apart from this there are some nefarious yoga such as KaalSarp Dosh, Sharpit Dosh, Kemdrum Yoga, Guru Chandal Yoga, Shakata yoga and Grahan Yoga etc. I am going to explain in short as to these harmful yogas.

You might have heard the name KaalSarp Dosh many times in your life. It is a hazardous Dosh in the birth chart that can ruin your life.

This silent killer happens in the Kundli when all the planets remain in between Rahu and Ketu. There are 12 kinds of KaalSarp yoga that occurs in the natal chart.

These Kaal Sarp dosh bring different kinds of troubles and obstacles in life. Even this nefarious Dosh has not spared the celebrities as well.

You can have more insight on KaalSarp dosh by reading my article here. If you have a KaalSarp Dosh in the chart you should never ignore and perform KaalSarp Dosh remedies as soon as possible.

Shrapit Dosh is the birth chart is another killer. This nefarious Yoga of Saturn and Rahu can confine your life.

You might have a very good family background; you will not have success and achievement in life. It restricts the life to a great extent.

The shrapit dosh do happen when the planet Saturn and Rahu conjoins together in any house in the birth chart.

Some of the results due to Shrapit Yoga given here.

Kemdrum Dosh is in the Kundli is another slow killer that harms the native stealthily. Hence, it is extremely easy to detect Kemadrum yoga in the birth chart even by a layman.

I have written a comprehensive article on Kemdrum Yoga and it remedial measures in astrology.

Kemdrum Dosh takes place when the planet Moon places alone and there is no planet either side of it.

This mischievous yoga in the birth chart can bring many sorts of danger, obstacles, losses, calamities and what not.

You should not be worried about Kemadrum Yoga in the natal chart as it can get cancelled in certain circumstances. Hence, it is wise to consult an astrologer if Kemadrum Dosh is going to harm you and effective remedies to get rid of its mischief.

Almost everyone understands what is Guru Chandal Dosh. Etymologically, Guru means Brihaspati (Jupiter) and Chandal means an outcaste or mean.

Hence, Guru Chandal Yoga in the horoscope is a highly detrimental planetary combination.

The native can face various problems in life. Some of the problems I am sharing here.

However, it is not always harmful. The Dosha gets cancelled when the planet Jupiter is posited in the Kendras i.e 1st, 4th, 7th and 10th house.

If the planet Moon is in Cancer and Jupiter is in Sagittarius, it will create Shakata yoga. However, it will affect not the native’s life.

Results of the Shakata yoga are as follows

Grahan Dosh is one of the notorious dosh in the Hindu predictive astrology. Grahan dosh takes place due to Rahu, Ketu, Sun and Moon.

If the planet Sun or Moon placed together with either Rahu or Ketu in the natal chart, then Grahan Dosh happens.

It also happens when the native takes birth during the period of Solar and Lunar eclipses. You should never neglect the remedies for Grahan Dosh if it happens in your birth chart.

Here is the snapshot as to what happens due to Grahan yoga in the Kundli.

The married couples find it difficult to conceive

Domestic problem with the members of the family

Slow progress and procrastination becomes the part of life

The chronic ailments, depression and disappointment sticks to the native

No doubt, the good yogas are the boon for the native. It brings phenomenal achievements in life, business success, social standing, marital happiness, happiness from children, power, position and authority.

However, the evil yogas in the birth chart can make your life a hell. Hence, it is extremely important to consult a wise astrologer and get the solutions.